NAIROBI, Kenya (AP) — #Pope Francis told Christian and #Muslim leaders in Kenya on Thursday that they have little choice but to engage in dialogue to guard against the “barbarous” Islamic extremist attacks that have struck Kenya, saying they need to be “prophets of peace.”

#Francis met with a small group of Kenya’s faith leaders before celebrating his first public Mass on the continent, a joyful, rain-soaked celebration of an estimated 300,000 faithful, including Kenya’s president. The Argentine pope, who has never been to Africa before, was treated to ululating Swahili singers, swaying nuns, Maasai tribesmen and traditional dancers at the Mass on the grounds of the University of Nairobi.

On his first full day in Kenya, Francis received a raucous welcome from the crowd as he zoomed around in his open-sided popemobile, some 10,000 police providing security. Some people had been at the university since 3 a.m., braving heavy showers that turned the grounds into thick puddles of mud. Others waited in queues 3 kilometers (1.8 miles) deep to get close to the venue.

But the size of the crowd — estimated by both police and the Vatican — was far smaller than the 1.4 million that Kenyan authorities had expected after declaring Thursday a national holiday. Vatican officials had predicted a maximum of a half-million people, and the lower number was likely due in large part to the weather.

In his homily, Francis appealed for traditional family values, calling for Kenyans to “resist practices which foster arrogance in #men, hurt or demean #women, don’t care for the elderly and threaten the life of the innocent unborn.”

The African #church is among the most conservative in the world, and African bishops have been at the forefront in insisting that traditional church teachings on #marriage and sexuality, and its opposition to abortion, be strongly emphasized.

Francis obliged, but also stressed issues of his own concern: He called for Kenyans to shape a more just society that looks out for the poor and to “reject everything that leads to prejudice and discrimination, for these things are not of #God.”

Francis heads later to the U.N. regional headquarters in Nairobi for an environment speech. On Friday, he arrives in Uganda for the second leg of his trip. 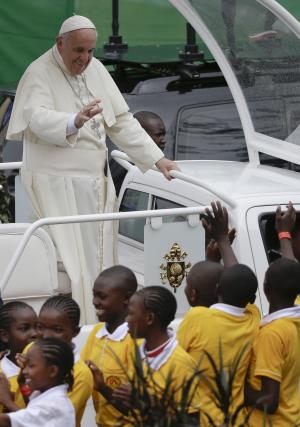 The pope insisted that religion can never be used to justify violence and lamented that “all too often, young people are being radicalized in the name of religion to sow discord and fear, and to tear at the very fabric of our societies.”

He said dialogue among the faiths isn’t a luxury or optional, but is simply “essential.”

Kenya, a former British colony, is majority Christian. Muslims represent about 10 percent of the population.

In the meeting, Francis referred explicitly to three recent attacks claimed by the Somalia-based al-Shabab extremist group, saying he knew well that the memories were still fresh in Kenya’s mind.

In April, the al-Qaida-linked al-Shabab claimed responsibility for the attack on a mostly Christian college in northeastern Kenya that left some 150 people dead. A month earlier, al-Shabab claimed responsibility for attacks in Mandera county on the Somali border in which 12 people died. In September 2013, at least 67 people were killed in an attack by al-Shabab on the Westgate mall in Nairobi.

“How important it is that we be seen as prophets of peace, peacemakers who invite others to live in peace, harmony and mutual respect,” Francis said.

His comments were echoed by Abdulghafur El-Busaidy, the head of the Supreme Council of Kenyan Muslims.

He said Christians and Muslims must work together to accommodate one another, and lead the country. “We should not step back,” he said. “We have to lead, because we are led by the word of God.”

Francis’ message of tolerance and his concern for the poor has been welcomed by Kenyans of all religious stripes.

“This pope has transcended religious fault lines,” said Kenyan Sen. Hassan Omar, a Muslim. “He has talked about the plight of Palestinians, the weak and the downtrodden. He epitomizes simplicity and demonstrated that he is foremost a defender for social justice.”……………….