Yes, I’m talking to you. Don’t you know that the only way you will lose is if you quit? Things may not seem fair and yet, in some capacity or another, everyone you know is facing some element of unfairness in their own personal lives. What sets you apart from the rest? The difference between you and them is that you are not going to quit.

One of my favorite stories in the Bible is a short story found in Genesis 26:19-22. It’s about a man named Isaac who dug in a valley and found a well of running water. Unfortunately, when he found the well, a group of herdsmen came and claimed the water belonged to them. Instead of giving up on what he wanted, Isaac left the first well and proceeded to dig for another well of running water. When he found the second well of water, his adversaries came a second time and claimed the well belonged to them. Isaac did not complain, Isaac did not start feeling sorry for himself and, most importantly, Isaac did not give up. He simply went ahead and began digging for a third well of water, which he finally was able to claim as his own.

We see through this story that when we are committed to pressing towards our goals, we will not allow anyone to discourage us from accomplishing them. Isaac would have had every right to give up on trying to find his own well of water because of the adversity he was facing. Instead, he stayed committed to seeking after what he wanted no matter how much opposition he faced.

This reminds me of another story found in Mark 2:1-4, where a group of four men were so insistent on bringing their paralyzed friend to Jesus, they broke through the roof of a crowded house and lowered him unto the premises just so Jesus could heal him. The Bible says that the house was so crowded that there was no room for anyone to get in through the front door. Yet, these men were determined to persist for what they wanted. They did not let a closed door turn them away from their intended goal. When faced with the closed door, they literally climbed to the roof and broke through the ceiling to get what they came for!

In life, we will always encounter opposition and closed doors that can generate valid excuses within us to quit. I just want to share with you that no matter what you are facing today, there is always another way to attack your problem. There is always another opportunity open for you to get to what it is you are fighting for.

Your challenge is waiting for you to conquer it. Problems are meant to be solved. It’s understandable that obstacles cause severe discomfort, but you have the power inside of you to fight through the discomfort until you get to the thing(s) that you desire. Never ever give up!

Written by Rocky Dania
Author of Dear Worshiper
rockydania.blogspot.com
Available in January of 2018 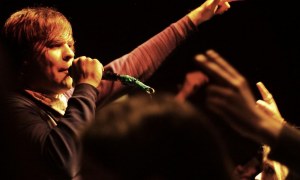 Thank you. This gave me hope.